Posted on December 7, 2012 by rsmalley | Comments Off on Reculver, Kent

Reculver once occupied a strategic location at the north-western end of the Wantsum Channel, between the Isle of Thanet and the Kent mainland. This led the Romans to build a small fort there at the time of their conquest of Britain in AD 43. In the 2nd century they built a larger fort, or “castrum”, called Regulbium which later was part of the chain of Saxon Shore forts. After the Romans left in the early 5th century Reculver became a landed estate of the Anglo-Saxon kings of Kent. The site of the Roman fort was given over for the establishment of a monastery dedicated to St Mary in AD 669. King Eadberht II of Kent was buried there in the AD 760s. During the Middle Ages Reculver was a thriving township with a weekly market and a yearly fair, and it was a member of the Cinque Port of Sandwich. The twin spires of the church became a landmark for mariners known as the “Twin Sisters”, supposedly after daughters of Geoffrey St Clare. In the 19th century a copy of the facade at Reculver was built for the St John’s Cathedral in Parramatta, Sydney. Reculver declined as the Wantsum Channel silted up, and coastal erosion claimed many buildings constructed on the soft sandy cliffs. The village was largely abandoned in the late 18th century and most of the church was demolished in the early 19th century. Barnes Wallis’s bouncing bombs were tested in the sea off Reculver in WWII. 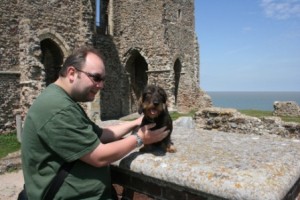 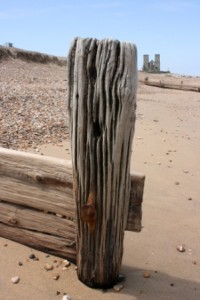 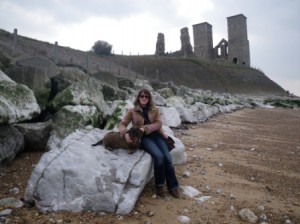 This entry was posted in Walks and tagged beach, heritage, leisure, UK. Bookmark the permalink.