Posted on June 18, 2019 by rsmalley | Comments Off on Scientists explain puppy dog eyes

The sad, imploring expression held such power over humans during 33,000 years of canine domestication that the preference for dogs that could pull off the look steered the evolution of their facial muscles, researchers have said.

The result is that dogs gradually acquired a new forehead muscle named the levator anguli oculi medialis, or LAOM, and have used it to deploy the doleful look to devastating effect ever since.

“They are very powerful animals in how they capture our hearts,” said Prof Bridget Waller, the director of the Centre for Comparative and Evolutionary Psychology at the University of Portsmouth. “We pay a lot of attention to faces, they are meaningful to us, and this expression makes dogs look juvenile and sad. It induces a nurturing response. It’s a cute factor.”

For the full article go to the Guardian website.

Posted on February 28, 2019 by rsmalley | Comments Off on Dachshund on duty

Click here for the Guardian story on Jimmy, the therapy dog. (My only concern is that they are giving Jimmy cheese. I thought cheese was bad for dogs?)

Comments Off on Dachshund on duty

Karl Ove Knausgaard is wrong – writers should own dogs

Posted on August 23, 2018 by rsmalley | Comments Off on Karl Ove Knausgaard is wrong – writers should own dogs

The author blames his dog for the fact that he was blocked for two years. But pets provide a vital emotional lifeline for anybody who spends time alone…

In an essay for the New Yorker, Karl Ove Knausgaard has detailed two difficult years of owning a dog, wondering if its presence in his home was connected to the fact that he did not write a line of literary prose during that period. (“Merely essays and articles,” he notes.) It was such a problem for him, he writes, that his six-volume autobiographical series, My Struggle, was originally called The Dog. “Has a single good author ever owned a dog?” he asks drily.

The essay is not an indictment of dog ownership, as such. Knausgaard admits that the dog was barely trained, that he saw too much of himself in the animal and that the failings were his own. He ended up giving it to a family, he says, that knew how dogs should be treated.

But Ernest Hemingway had dogs, as did, to name just a few others, Virginia Woolf, Kurt Vonnegut, EB White, John Cheever, PG Wodehouse and Elizabeth Barrett Browning. For writers who are not struggling to get down six volumes of painfully detailed autobiography – or freelancers without fixed hours, or anyone who works from home, or anyone who lives alone – having a pet can be a salve. A good dog is good company, less demanding than another person and far more devoted, in exchange for ear scratches. I have found that isolation feels muted with an animal around, even if the only things you have said that morning are: “Was that you?” and “What haveyou been eating?”

Crucially, a dog forces you into the world. If you have a problem to solve, time away from a screen in the fresh air makes you think differently. Before having a dog, if I had a busy week, I could stay indoors for longer than is healthy. Without exercising social skills, it’s incredible how quickly they start to collapse. Dogs take you outside, they make you walk and move, they train you in the art of polite chat with strangers. Dogs make the world seem less cold and less alien. Isn’t that the point of the best writing, too?

After a video of a woman feeding a cone to her pet went viral, other dog-owners were quick to point out that they share saliva with their dogs, too. But it isn’t always safe.

Read the article on the Guardian.

Comments Off on Can I share my ice-cream with my dog?

Dogs are twice as friendly to humankind as previously thought, suggests study

Posted on June 3, 2016 by rsmalley | Comments Off on Dogs are twice as friendly to humankind as previously thought, suggests study

Humankind’s long friendship with the dog may have begun at least twice. Grey wolves in western Eurasia may have started hanging around Stone Age hunter-gatherer clans even before humans and dogs clinched the relationship perhaps 14,000 years ago in east Asia.

New research based on DNA samples from prehistoric hounds, as well as genetic studies of modern dogs and wolves, suggests that two populations of grey wolves – separated by thousands of miles and thousands of years – may have begun the connection that turned Canis lupus into Canis lupus familiaris.

The scientists say in the journal Science that their scenario remains hypothetical. Researchers have been arguing about the origins of the spaniel, the terrier and the collie for more than a decade.

“Animal domestication is a rare thing and a lot of evidence is required to overturn the assumption that it happened just once in any species,” said Professor Greger Larson, one of the authors and the director of the Wellcome Trust palaeogenomics and bio-archaeology research network at Oxford University.

The domestication of cattle, sheep and goats began with the first farm settlements in the Fertile Crescent at the end of the last Ice Age 10,000 years ago. The only animal known to have been domesticated twice is the pig, in both east Asia and the near East. The same story might be true for Rover and Fido. If so, grey wolves must have started hanging around human settlements for food scraps: the step from scavenger to hunting companion would have taken many generations.

For the full article go to the Guardian

Comments Off on Dogs are twice as friendly to humankind as previously thought, suggests study

Ways to know your dog loves you

Posted on September 10, 2015 by rsmalley | Comments Off on Ways to know your dog loves you

25 ways you know your dog loves you

Comments Off on Ways to know your dog loves you

How dogs get older

Posted on September 3, 2015 by rsmalley | Comments Off on How dogs get older

Amanda Jones has dedicated the past 20 years to an incredible photography project which aims to show just how fleeting the lives of our beloved pets are.

Comments Off on How dogs get older

Posted on August 15, 2015 by rsmalley | Comments Off on Dogs don’t sleep upside down

An episode of QI from a couple of years ago included the statement that dogs don’t sleep upside down. Well that’s just ridiculous – as any dog owner would know.  Here is Couscous from yesterday afternoon. I’m watching tv and she’s snoring away on my lap – upside down. 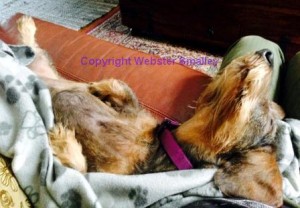 Comments Off on Dogs don’t sleep upside down

Posted on July 3, 2015 by rsmalley | Comments Off on Working dogs

The author and ex-vet Gill Lewis shares photographs of the dogs that inspired Puppy Academy, her new series for younger readers, from her faithful childhood pet Zak the Alsatian, to companion dogs for autistic children to the wonderfully brave search and rescue dogs

Comments Off on Working dogs

Your enemy’s enemy is your dog, scientists find

Posted on June 12, 2015 by rsmalley | Comments Off on Your enemy’s enemy is your dog, scientists find

Research appears to show dogs will snub people who are mean to their owners.

Comments Off on Your enemy’s enemy is your dog, scientists find