The dog who held the record as the world’s oldest has died at 21 years old, her owners have said.

Guinness World Records officials presented Chanel with a certificate as the world’s oldest dog at a birthday party in Manhattan last May.

Chanel was walked daily, her owners said, but also had unhealthy habits.

She enjoyed butter sticks and chocolate – usually feared to be toxic to dogs – Mrs Shaughnessy said.

“She once ate an entire bag of Reese’s Peanut Butter Cups, and, you see, she lived to be 21, so go figure,” Mrs Shaughnessy told Associated Press.

Chanel also liked wearing jumpers, as she was sensitive to the cold, the Shaughnessys said.

The couple attributed Chanel’s longevity not to healthy living but to God. “Dog’s are God’s angels sent here to look out for us,” Mrs Shaughnessy said.

Mr Shaughnessy had nominated her for the title after noticing there was no record listed in Guinness World Records.

But there are rival contenders for Chanel’s title – including Max, a dog in Louisiana whose owner, Janelle Derouen, has submitted documentation to Guinness apparently showing that he is 26. 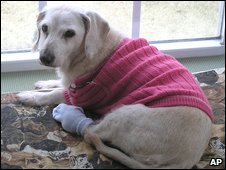 This entry was posted in News and tagged dachshund. Bookmark the permalink.